Hello all,
Our position is 40.05N x 139.45W.  Heading 081dT. We are cruising 5-6kn on a broad reach with NW winds 15-17kts. Last night was foggy and millions of these floating jellies with sails illuminated by the STB nav lights all night long. 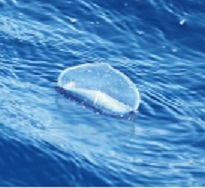 For the past several days these guys have been sailing on by. These creatures, whose scientific name is Velella , aren’t actually jellyfish but hydrozoans, related to the Portuguese man-of -war.
Yet unlike man-of-war, they don’t sting humans, though authorities don’t recommend touching your face or eyes after handling them.
Each little sailboat, measuring about 2.75 inches (7 centimeters) long, is in fact a colony of hundreds of smaller organisms, each with a specialized function such as feeding or reproduction, researchers say. “They sit at the surface of the ocean and have little sails ,” and their movement depends on which way the wind is blowing, said Richard Brodeur, a fishery biologist at NOAA Fisheries’ Newport, Oregon, research station. Most of the time off the coast of Oregon and California, the winds are blowing toward the South, into the open ocean. But when big storms sweep out of the southwest it blows these living flotillas onto the beaches. There, they usually die, giving off a bad smell as they rot.
They are everywhere and so dense if you go for a swim they will be all around you.
We have been under motor for the last 12 hours until the wind picked up this morning about 0700. Very smooth sailing now and yesterday before the wind died. The current grib looks good for us with consistent flow going our direction. Attached is the file showing the LOW up near Canada turning counter clockwise and then the HIGH to the east turning clockwise. Cool stuff to view so plainly. We came uncomfortably close to a pallet made up of 4×4 lumber. Imagine what that could do if hit head on while moving at 8-9kts… ouch. We have been seeing more ships now that we are approaching the west coast on this latitude. Thankful we have A.I.S. to spot them in time to get out of the way but they can see us too so we notice they change their course to remain at least 5nm away on their closest point of approach. This one, Hyundai cargo ship is headed to Pusan and has an ETA to their destination on 9-07-16.
We are 817nm away from San Francisco and our ETA is some time around Labor Day weekend. Still too soon to pinpoint an exact date and time. Today we are doing some laundry, laying out on deck catching some rays and after my watch I am making my bolognaise sauce for a pasta dinner tonight.
Life is good aboard the Galen Diana today.
More updates to come as we continue our approach towards the west coast…
Standing by on the Pacific Ocean.
Rod. 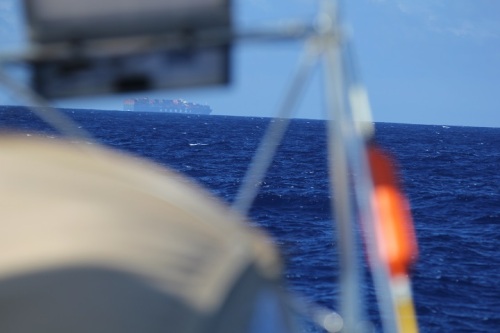